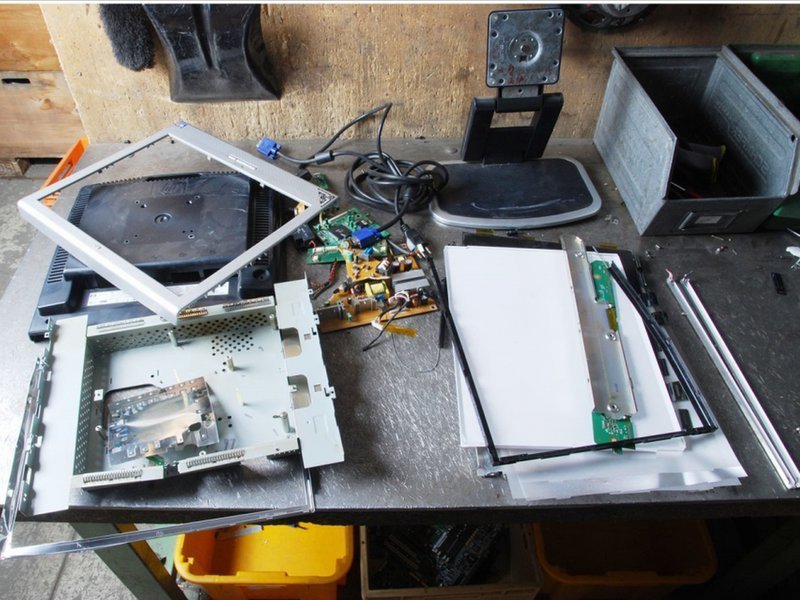 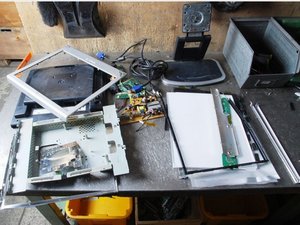 After dismantling a Flat Screen Monitor, the following parts and components have to be dealt with specially (apart from the frame and printed wiring boards): valuable transparent plastic layers, the liquid crystal layer, and the backlights.

The light-conducting and -diffusion layer in an LCD or LED monitor is made of high-quality plastic which can possibly be commercialized separately from common plastics. If relevant amounts of this valuable material can be gathered, a potential way to sell it are online recycling markets. As shown in the image, the layer is a thick layer which is highly transparent. It is directly connected to the light source (backlight of the LCD).

Large liquid crystal layers are mainly used in computer and TV monitors, smaller ones are found in printers, fixed line telephones, photo cameras etc. Despite their size, their properties are the same.

Liquid crystal displays rely on the light modulating properties of certain liquid crystalline substances. This liquid crystal layer is located between two (dark) polarizers, which is enclosed by several other, usually white or transparent plastic layers (see above).

Liquid crystal is not just a liquid, it is actually a state in-between liquid and solid.

The optical properties of the liquid crystal layer are modified by applying an electric field to it. Liquid crystals do not emit light directly and are therefore dependent on a light source (in general cold cathode fluorescent lamps or LEDs). The CCFLs are hazardous and must therefore be treated cautiously (see below and Chapter 3.5. Lamps).

Store the LCD layers in a container. If possible, avoid breakage of the layers.

Another option is the disposal of the liquid crystal module (without CCFL) in a landfill or its ontrolled incineration.

The most common way to illuminate the liquid crystal layer is to use a cold cathode fluorescent lamp (CCFL). They increase the luminosity of the screen. They are found in laptops, TVs, and other devices with LCDs (photocopy machine display, mobile phones, etc.). CCFLs are classified hazardous due to their mercury (Hg) content and the phosphor layer. The mercury is applied to the fluorescent tubes in a gaseous form. If it is ionised by electricity, it emits.

UV light, which in turn is transformed by the phosphor layer into visible light. Two CCFLs are to be found inside the display frame, usually on the upper and bottom parts.

Depollution should be done in a fume hood with an air pollution control system to avoid mercury vapour exposure to the workers when a backlight accidentally breaks.