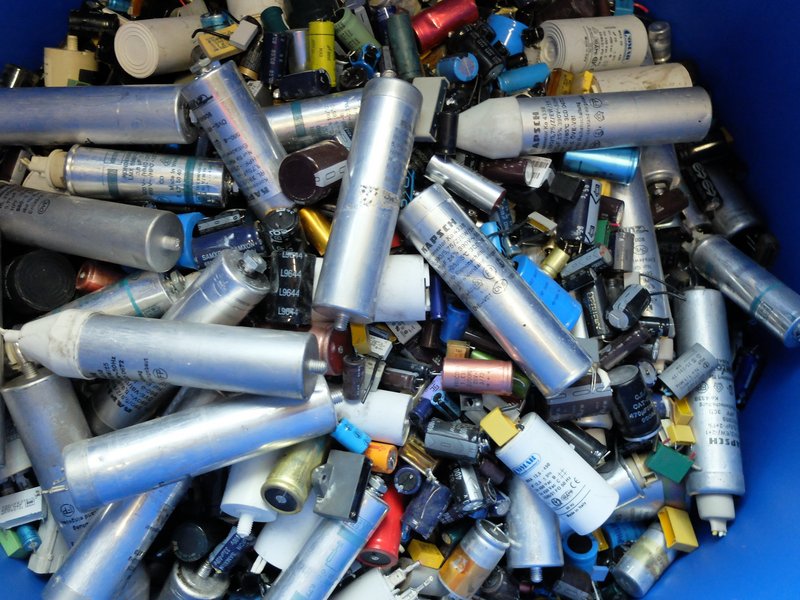 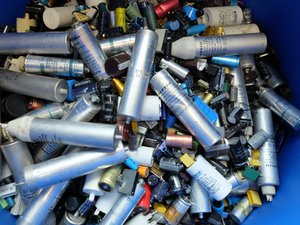 Capacitors are present in any electrical and electronic appliances and their appearance is very diverse. Some are similar to alkaline batteries, but wear a ruff on the upper part.

Capacitors may retain a charge long after power is removed from circuit; this charge can cause dangerous electrical shocks. Those used in camera flash can be extremely harmful and dangerous.

Critical capacitors (with PCBs) are large (same size or larger than a thumb) and produced before 1987. Therefore, old appliances (HiFis, refrigerators, TV, electrical ovens, vacuum cleaners, etc.) should be depolluted with caution.

Old large capacitors are very likely to contain polychlorinated biphenyls (PCBs) as dielectric fluids. New electrical components are no longer produced with PCBs. As a rule all capacitor with a diameter larger than 2 cm (same size or larger than a thumb) and found in appliances made before 1986-87 should be handled with extreme caution.

PCBs are a family of more than 200 different chlorinated organic molecules. They are either liquids or solids, colourless or light yellow. Besides capacitors, products made before 1987 with PCBs are fluorescent lighting fixtures, hydraulic oils, etc. They have been used as coolants and lubricants in electrical equipment because they don’t burn easily and are good insulators. Exposure to PCBs may lead to skin diseases (chloracne, rashes), liver damage, alteration of estrogens formation (reproduction problems). PCBs are very probably carcinogens.

PCBs belong to the so-called Persistent Organic Pollutants (POPs) and are extremely stable compounds remaining in the environment for a very long period. They can travel easily into air or into water with organic particles and bind strongly in the soil. PCBs accumulate easily in animals, and can reach significant concentrations in fish and marine mammals. Therefore their elimination is regulated within the Stockholm Convention.

There exists a certain concern about large capacitors from microwaves (magnetron) as they may contain beryllium in the ceramic material around the filament. Beryllium (Be) and its salts are toxic substances and potentially carcinogenic. It may cause acute beryllium disease, a form of pneumonia. Beryllium dust production and inhalation should be avoided, as they may provoke lung cancer. People working with beryllium may become sensitive to it and develop an inflammatory reaction called chronic beryllium disease (CBD) that occurs within a few months or many years after exposure. The symptoms are fatigue, weakness, night sweat, difficulty in breathing, persistent dry cough. It can result in anorexia, heart disease, and lung inflammation. CBD is treatable but not curable.

Capacitors, especially large ones, may give an electrical shock that can be harmful and dangerous. The best way to avoid it is to leave the appliances disconnected from any energy sources during a few days. Therefore, WEEE should not be connected to the electrical network before dismantling.

Never test an appliance before opening it!

Do not crush or open capacitors!

Capacitors that do not match these characteristics can be processed with metal scraps.

Capacitors containing PCBs should be disposed of as soon as possible.

In case they have to be stored for any length of time, it is important to take the following points into consideration:

When shipping PCB containing capacitors abroad the requirements under the Basel Convention need to be fulfilled. Therefore please be in contact with your corresponding authority to receive information regarding the required documentation and preparatory and administrative work.

Removal and disposal of PCBs can only be undertaken by authorized hazardous waste service providers. Capacitors containing PCBs must not be sent to a metal recycler for recycling. PCBs is known as dioxin precursor when it is burnt at too low temperature and with lack of oxygen.