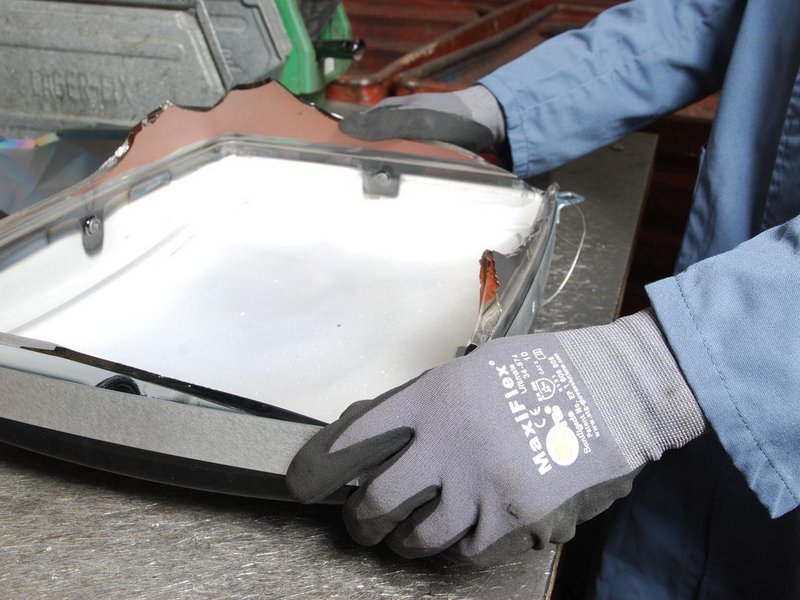 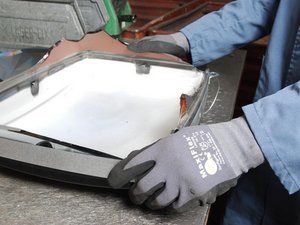 During CRT manufacturing a phosphor layer is spread on the inner surface of the panel glass in form of a white powder (see chapter 2.6. Separation of Funnel and Panel Glass). Phosphors are substances that exhibit luminescence: when electrons (from the electron gun) strike the phosphor, it emits light. Depending on its composition, the light appears in different colours.

The phosphor layer in a CRT monitor is very thin (few nanometres), thus only small amounts are used per monitor (ca. 5-7 g). It is a white powder that is coated on the inner surface of the panel glass. When electrons strike the phosphor, it emits light. Depending on its composition, the light appears in different colours. To generate the colours red, green and blue, the panel glass is coated with three different phosphors, that contain e.g. zinc sulphide, cadmium sulphide, compounds of yttrium and europium. The powder consists of a large variety of elements, among them also hazardous ones (see Table). In black/white CRTs, the phosphor layer contains significant amounts of toxic cadmium (Cd).

The phosphor layer in a TV or computer CRT can be easily located on the inner surface of the panel glass.

The phosphor layer has to be stored in a closed recipient (cover!) which prevents its release.

The generation of phosphor dust should be avoided during dismantling. It is recommended to wear a dust mask. To protect the worker, the air around the workplace should be aspirated by a fume hood.

Phosphors contain both valuable and hazardous elements. There are two alternatives for their treatment: