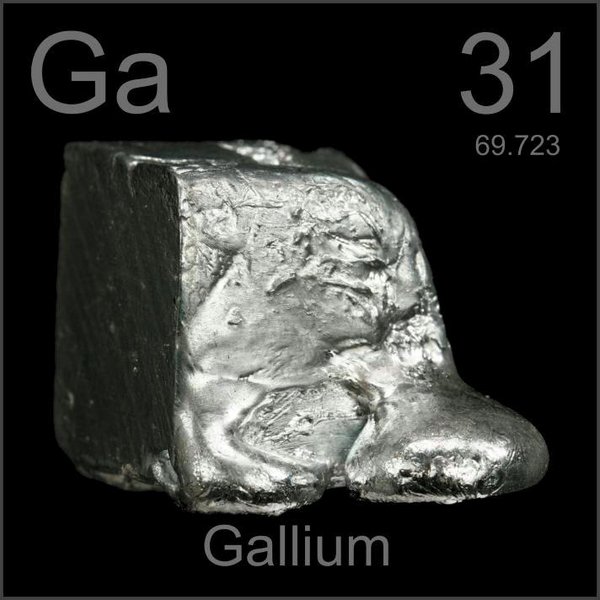 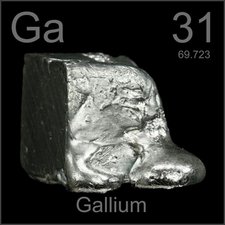 Gallium is a chemical element with symbol Ga and atomic number 31. It is in group 13 of the periodic table, and thus has similarities to the other metals of the group, aluminium, indium, and thallium. Gallium does not occur as a free element in nature, but as gallium(III) compounds in trace amounts in zinc ores and in bauxite. Elemental gallium is a soft, silvery blue metal at standard temperature and pressure, a brittle solid at low temperatures, and a liquid at temperatures greater than 29,76 °C.

The consideration of gallium as a critical raw material is not related to the availability of primary gallium as such, but to the importance of gallium for a range of high-tech applications and due to the dependency on a single country – China – with more than 80 % of the global crude gallium capacity.

Gallium is mainly used as gallium arsenide (GaAs) and gallium Nitride (GaN) for the semiconductor industry for integrated circuits (IC's) and optoelectronic devices. Some specific Ga-combinations are used for a variety of LED types. (USGS, 2016)

Gallium can be found in electronic equipment in two components:

Gallium is mainly found as GaAs III-V semiconductor in high-frequency ICs for mobile communication. Frequently such packages are multi-chip packages with an GaAs chip and a silicon chip. The actual content of gallium in such a package is approximately 1,4 % of the total module weight, and typically in the range of 0,1 mg per semiconductor package. 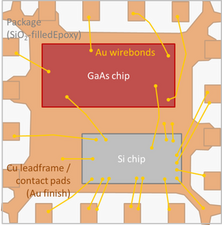 Gallium is also be found in LED backlights of LCD displays. However with the trend towards OLED's, gallium containing based backlights might be obsolete in the future.

Because of low gallium concentration in IC packages and the existence of numerous contaminants, the dismantling of gallium seems not to be economic feasible. Therefore no dismantling guide is provided at this point.