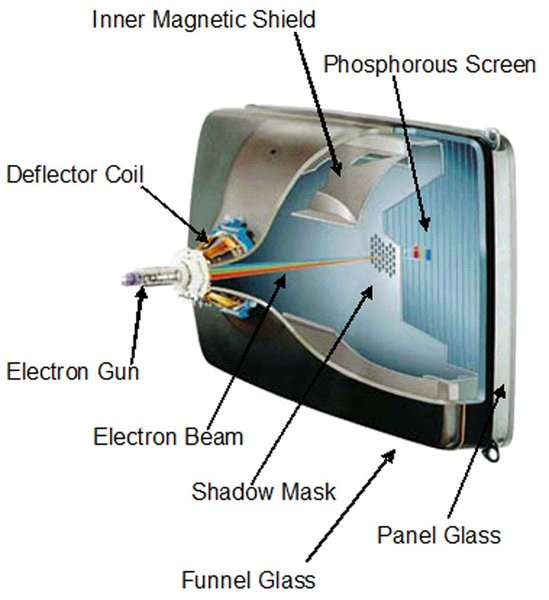 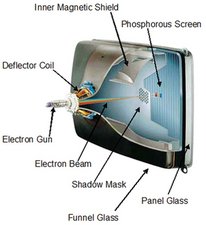 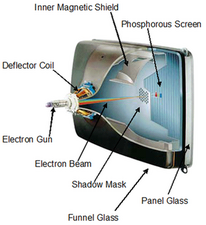 The Cathode Ray Tube (CRT) is a vacuum tube containing an electron gun (a source of electrons) and a fluorescent screen used to create images in the form of light emitted from the fluorescent screen. CRTs contain a large amount of hazardous substances such as lead and barium oxide and therefore must be treated carefully in an adequate plant to avoid personal injury.

CRTs consist of different parts containing hazardous substances. The chemical composition of the panel and funnel glass is different because of the different technical requirements. Whereas in funnel glass lead oxide is used as an additive (in average 15%) for absorption of the high energetic radiation, the panel glass contains barium oxide or strontium oxide (in average 13%) (Gabriel 2001). The phosphor layer contains zinc sulphide, cadmium sulphide, yttrium, and europium.

During CRT manufacturing a phosphor layer is spread on the inner surface of the panel glass, whereas for the colours red, blue and green zinc sulphide, cadmium sulphide, yttrium- and europium are used. In black and white CRTs, a high fraction of cadmium sulphide is found in the phosphor layer. These monitor layers are applied in very thin coating and weigh 5 to 7 g per monitor.

Getter platelets (remainder from the electron gun) are containing barium as well as barium containing compounds. 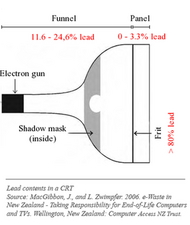 Lead and lead containing compounds are classified as cancer-causing. Uptake of lead can lead to acute and chronic poisoning. In the environment lead accumulates in aquatic and biological chains. In CRTs lead is embedded in the glass matrix and does not cause direct danger. However, during grinding of the glass fractions, lead can be laid open, eluted and transported by air. If there isn’t any flue gas purification equipment, it can lead to higher emissions of lead and consequently to a distribution in the environment.

Mainly cadmium and cadmium containing compounds contained in the phosphor layer are classified as toxic and cancer causing. They accumulate in kidneys and lever and can cause acute and chronic poisonings.

Barium oxide deriving from electron guns is classified as harmful.

To reduce the impact of the hazardous substances in CRTs on the environment, CRTs must be de-manufactured under controlled conditions.

A vacuum is applied to the interior of all CRT monitors. The monitors may implode if the outer glass envelope is damaged. Due to the power of the implosion, fractions may bounce and explode outwards with splints travelling at potentially fatal velocities. To avoid personal injury it is therefore crucial to equalise the pressure before any further treatment (see CRT Monitors Disassembly).

Using specially designed processes and machinery, the CRT glass body can be separated into panel glass, funnel glass, shadow mask and phosphor coatings. During this process all CRT coatings such as graphite and silicate conductive coating, iron oxide, aluminium oxide, and some other substances are removed. The exact composition of the coatings depends on who the original CRT manufacturer was.

The cleaned CRTs can be stored in open containers. To prevent leakage the container should not be exposed to the weather. If CRTs or parts of it are exposed to rain, the above mentioned hazardous substances can elude and drain into the lithosphere!

Once the CRT is further treated, e.g. panel is separated from funnel glass, all hazardous materials should be isolated immediately. 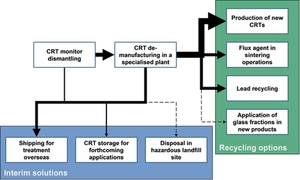 A method exists to separate panel and funnel glass of CRTs by hot wire cutting. Another method to separate the different glass fractions is to crash the CRT glass body as a whole. An especially developed technology then allows separating the grinded glass splints by the application of X-ray. X-ray detects lead containing glass splints and subtracts them from the pure glass fraction. Other toxic substances are washed out under controlled conditions.

After demanufacturing the CRTs, the cleaned glass fractions should be recycled. The figure on the left shows a selection of recycling options and interim solutions of which the ones indicated with a thick arrow should be preferred. Dashed lines mean that the option should not be considered as far as possible.

Source: Dismantling Guide for IT Equipment, which was elaborated within the SRI project and financially supported by SECO and UNIDO, June 2015